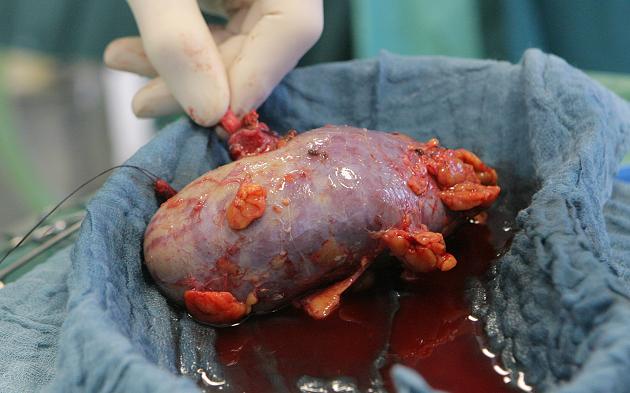 Frank Walter Steinmeier did it for his wife – he gave her a kidney. The number of living donors and those who survive thanks to such an organ has been growing for years. But donating life also harbors risks for the donor that should not be underestimated.

The regional express stops once an hour in Paulinenaue, a 1,500-inhabitant hamlet northwest of Berlin . You need a half hour train ride to the capital or a car here, where Brunhilde and Erich Ernst are now living their “second life”, as they say. The two of them also experienced firsthand what mobility means and what immobility means. After all, Erich Ernst, now 64, had progressive kidney failure tied to his armchair. Dialysis or transplantation was the alternative. But the waiting list for a donor organ was long. The couple decided to have a live transplant: in the summer of 2010, she donated one of her kidneys to him.

The subject of living donation has been gaining in importance for years, including on World Kidney Day (March 13). In 1991, only three percent of the kidneys transplanted came from living donors; in 2011 it was almost 28 percent. The reason is not only medical progress, but above all the low readiness of Germans to donate organs post-mortem, and which has recently continued to collapse: from 2012 to 2013 alone, the number of organ donors fell by a sixth to only 876. There were too many reports of bogus Allocation methods and manipulation of the waiting lists in some German clinics unsettled people.

In addition, there is the sensitive issue of brain death diagnostics. Recently, too, there were individual cases where the prescribed procedure for determining brain death had not been followed exactly. This is another reason why living donation, although formally subordinate to corpse donation as the second-best solution, is more important and, given the endlessly long waiting lists, promoted and recommended by many doctors. Family members, but also close friends, can donate for one another. Also because these organs are rejected less often and function better and longer on average than post-mortem donations, this is a real plus for most recipients.

So for Erich Ernst: Today, three and a half years after the transplant, he is back in his armchair, but now voluntarily. He cheerfully picks up the coffee cup and tells about the fact that he can be on the road, riding a motorcycle. “I also have a mini job as a truck driver again.” The joy of being able to lead an almost normal life again can be seen in him. But with his wife’s decision, he initially had his problems.

“At the beginning I would have preferred to wait to see if there was still an organ from the donor list,” he says. He was worried about his wife – and also about their daughter. “If something had happened to my wife and me during the operation.” But dialysis, the other option, would have meant a trip to Berlin to the dialysis center three times a week. “Neither of us wanted that,” says Brunhilde Ernst energetically and lovingly nudges her husband. “No, we wanted to have the good life a little longer.” But the path to living donation posed a number of hurdles for the couple.

Living donation – danger for the donor? In the case of the Ernsts, a process of several months for living donations is set in motion: preliminary medical examinations and health checks, blood group comparisons, consultations with doctors and psychologists, and finally the mandatory visit to the ethics committee, which has to rule out the fact that commercial interests are involved. “I was asked about my motivation and was told so often that in the end I could hardly hear it,” says Brunhilde Ernst. On June 15, 2010, the two of them came under the knife in parallel. “When I was pushed out, I shouted to my husband: If everything goes well, we’ll go on a cruise.”

The two are lucky. The operation succeeds and the new kidney works promptly. But while Erich Ernst recovers quickly, his otherwise agile wife feels as if the plug has been pulled out of her. “I was very, very tired and limp. The doctors had already announced this to me, and that’s how it was: I just sat in the garden chair all summer, nothing more was possible.” Only after a joint rehab in autumn does she slowly regain strength. “I’m fine today,” she says.

But things don’t always run so smoothly. Ralf Zietz from Morsum near Bremen donated a kidney to his seriously ill wife in the summer of 2010 and is still suffering from the consequences today. Chronic exhaustion, difficulty concentrating, and forgetfulness make it difficult for him to continue doing his job. The self-employed entrepreneur and sole earner can now only work part-time. He sees himself as a victim of a lack of medical education. “During these conversations, we only talked about the usual risks of an operation, possibly scarring problems or high blood pressure.” However, he was left in the dark that weakness and exhaustion can also be permanent. “With what I know today, I wouldn’t have the operation done again.”

While his wife is clearly better again, Zietz does not get out of the postoperative low. “I felt exploited and exploited,” he describes in an ARD film. Even today he still seems emotionally badly affected by the loss of his performance. Together with other people affected, he founded a self-help group and has since been campaigning for more information about the possible side effects of living donation. In several places in Germany, those affected have already filed lawsuits against the transplant centers – due to insufficient information.

Zietz estimates the proportion of living donors who permanently suffer from the consequences of chronic fatigue due to their inadequate kidney function at around ten percent. He cites a Swiss study, which, however, has not been published in full. Zietz and his colleagues oppose the fact that their complaints are often not viewed as a neurological but a psychological illness – and in the worst case without any right to compensation.

“It is undisputed that the fatigue syndrome (chronic exhaustion syndrome) also occurs in donors, but it also occurs in healthy people. There are no serious studies that show a higher incidence in donors,” says Professor Uwe Heemann from the university hospital Munich and Chairman of the Living Donation Foundation. It is similar with depression. “Especially when living donations are unsuccessful and the organ is rejected, it can lead to depressive moods.” So far, there has been no evidence of an increased risk compared to the normal population.

The donor’s fate is unpredictable What Heemann sees as well as the community of interests around Zietz are problems with insurance. “The new transplant law has brought us a big step forward in terms of donor protection, but there are still questions about its concrete implementation. Are chronic fatigue or high blood pressure a possible, foreseeable consequence? And: does the accident insurance pay? Not?”

Brunhilde Ernst has had similar experiences. “I always mess with my health insurance company – for example when they don’t want to reimburse the travel expenses to Berlin for my aftercare because the clerks don’t know about the new law.” Ernst also came to the conclusion from her experiences that it makes sense to exchange ideas with those affected and to support them – she is networked nationwide in a self-help group. “At the time I would have liked to be able to speak to one or the other donor beforehand and hear about their experiences. Many now turn to us when they are in the decision-making phase.”

The Berlin psychologist Merve Winter is also interested in this phase – from a professional point of view. She assesses possible donors and accompanies them in the decision-making process at a university clinic. “There is definitely a moral imperative to living donations. And women often comply particularly quickly,” she sums up. In fact, 60 percent of living donors in Germany are women.

Winter notes that not all potential donors are really clear about their motives. Feelings of guilt, misunderstood altruism, the desire to generate gratitude in the recipient – a lot can play a role here. “In addition to the many positive aspects that it brings with it, living organ donation is still a psychological and physical challenge and an unreasonable burden for those affected, especially for the donors,” emphasizes Winter in a study. She therefore advocates giving ambivalent feelings more space in advance and not simply suppressing them.

The transplant doctor Andreas Pascher from the Virchow-Klinikum of the Berlin Charité knows this ambivalent attitude of many potential donors, who are torn between fears and the desire to help. “About a tenth of those willing to donate are turned down for such psychosocial reasons,” he says. A study on the progress of living liver donations, co-authored by Pascher, sums up: “Most living liver donations show a positive postoperative course.” However, the decision-making process prior to the intervention should not be accelerated and the medical follow-up care of the donors should be supplemented by discussions.

“I was terrified for him”

As the recipient of a partial liver donation from her father, Claudia Schneider from the Heilbronn area also experienced this emotional rollercoaster ride. “I was terrified for him and at first didn’t want to accept the donation. But he said: ‘If I don’t help you now and you die, then I can no longer live afterwards.’ He made his will and clarified everything. But when I woke up from the operating room everything went well. Even if my father had problems with his scar for a long time – today his liver has completely grown back, he is healthy. And our relationship is still more intimate than before. ” She laughs happily. “I stroke my new liver every day. This is something really big for me.” Nevertheless, she would not recommend such a step to anyone who asks her for advice.

Claudia Schneider has just celebrated her milestone birthday at the age of 42 – her 10th with a new liver. The Zietz family fights their way back to life. And the Ernsts from Paulinenaue? They went on their big cruise.