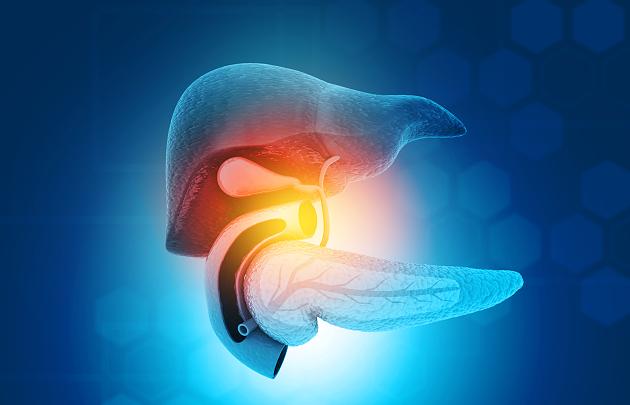 Gallbladder cancer in particular only leads to symptoms at an advanced stage. Why this is so, what role gallstones play – and why the prognosis has so far often been unfavorable.

Biliary cancer, with around 5500 new cases per year, is one of the rare forms of cancer, but it is particularly risky. According to popular opinion, the tumor causes almost no early symptoms and is therefore usually only recognized late when an operation is no longer possible and the tumor has already metastasized.

Biliary cancer – important: inside or outside the liver

The fact is, however, that the colloquial term biliary cancer, medically cholangiocarcinoma (CCA), covers different forms. There is gallbladder cancer, which forms in the gallbladder, which in turn is embedded in the liver.

“Depending on the localization, we differentiate between intra- and extrahepatic carcinoma, that is, those that develop inside or outside the liver,” explains Arndt Vogel, spokesman for the “Hepatobiliary Tumors” working group of the Internal Oncology Working Group (AIO) and head of the Visceral Oncological Center Hannover Medical School (MHH).

An exception in connection with cholangiocarcinoma is Southeast Asia, especially countries like Thailand. This cancer often occurs there because certain parasites can inflame the biliary tract. Chronic inflammation plays an important role in the development of biliary cancer.

The following risk factors come into play in the western industrialized nations, but they are also closely related to inflammation:

Around ten percent of Germans are said to have gallstones, and the risk increases with age. “But very few of those affected develop cholangiocarcinoma. This cancer is very rare, ”says the medicine professor reassuringly.

The gallbladder should only be removed if the stones cause problems, i.e. colic and inflammation.

The signs of gallbladder inflammation caused by stones are somewhat similar to those of cholangiocarcinoma (CCA).

So biliary cancer can cause the following signs:

The location of the carcinoma is crucial for the stage at which symptoms appear:

That is why bile duct cancer that grows outside of the liver is usually diagnosed earlier – but it is difficult to operate because of its often complicated location next to blood vessels and does not make the generally difficult situation with cholangiocarcinoma easier, the oncologist limits the associated high expectations.

Diagnosis of cancer of the gallbladder and bile ducts

Doctors use cross-sectional image diagnostics such as MRI and CT. “This allows the suspicion to be clarified and the staging, i.e. stage and spread, to be identified,” explains Vogel.

The histological examination provides additional details about the tumor, whereby the samples in gallbladder cancer are relatively easy to obtain. However, this is more difficult with extrahepatic tumors because the biliary tract is often narrow and winding. The examination is carried out through an endoscope, the method here is called endoscopic retrograde cholangiopancreatography (ERCP examination).

Are there any less invasive methods? Ultrasound, carried out endoscopically from the inside through the stomach or from the outside, can also be informative, says the cancer specialist. However, the methods of first choice are MRI and CT.

If the suspicion has been confirmed and the results of the examination enable a classification of the tumor, the goal is to remove the carcinoma surgically. “However, as already described, this is sometimes difficult due to the location of the tumors,” reports Vogel. However, the surgical techniques have improved significantly in recent years.

The standard treatment for patients with advanced tumors is chemotherapy, with a combination of gemcitabine and cisplatin.

In a palliative situation, i.e. to increase survival time and / or to improve quality of life, local therapies such as selective internal radiotherapy (SIRT, radioembolization) are currently used in clinical studies . Radioactive microspheres are guided to the tumor via an inguinal catheter, its cells are destroyed and healthy tissue is spared. The first results show that for some patients many months can be gained with this.

The prognosis for biliary cancer is poor …

Despite all these possibilities, few patients can be cured. Even if the tumor could be completely removed in the healthy, the recurrence rate is still relatively high. “60 to 80 percent of the tumors come back,” reports Vogel. Because the tumors spread very early.

… but with the therapy “a small revolution is emerging”

This is the bad news. In fact, these prospects could improve in the future. The oncologist says: “Because a small revolution is taking place here at the moment.” The interest of pharmaceutical companies in this rare cancer has increased significantly, and intensive work is being carried out on the development of new drugs.

The reason for this change is the fact that it has been discovered that numerous genetic changes occur in these tumors and thus allow a molecular, i.e. targeted therapy. There have been many studies on this topic for a few years now.

1. Inhibitors against IDH1 mutations , from which patients with a corresponding cholangiocarcinoma can clearly benefit.

2. Inhibitors against FGFR2 , fusions, MSI, NTRK and others.

“There are currently a number of very promising active ingredients in the test that have the various genetic changes as a starting point,” reports the oncologist. How much these new therapies could improve the treatment of biliary cancer becomes clear when one realizes that 40 to 50 percent of all these tumors, especially intrahepatic ones, show such genetic changes and are therefore suitable for targeted, molecular therapy.

It will be some time, however, before the new therapies are available to all patients. Until then, it is still true that biliary cancer is difficult to treat and the prognosis is unfavorable.

This makes prevention all the more important. To what extent can everyone prevent this tumor – apart from the advice not to smoke, which is so important with regard to many other diseases? Above all, the expert has one recommendation:

Get gallstones cleared up if they’re causing problems. However, this does not mean that everyone who has gallstones should be afraid: Gallstones are considered to be risk factors for gallbladder cancer, but only one percent of all gallstone carriers develop this tumor.